SCHEDULE FREE INSPECTION
All inspections are free and flexible according to schedule availability.
SCHEDULE NOW 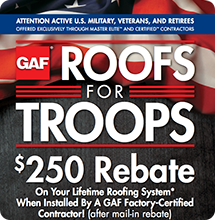 Iggy P.
Had a wonderful experience with gold roofing under the circumstances! I contacted gold roofing when my roof was leaking! From the moment the phone was answered I was made to feel like a priority even though our area was hard hit by hail! It took a week for someone to come out, John showed up and was very thorough checking the roof, attic, and inside! He was honest, personable, friendly, and educational!

Would highly recommend this crew to anyone!Marty G.
We recently suffered some hail and wind damage, and I though we were going to need a quick repair but our insurance company said it was time for a new roof. We had several contractors bid on the job, including Gold, and all were relatively close in price (we did not give them the insurance company estimate in advance, despite the insistence of several of the companies). Gold had installed the original roof 10 years ago when the house was built, and had done some minor repairs for us over the years, as we're in a high wind area.

The Gold sales rep inspected the roof and, while he did not agree with the insurance adjuster, he gave us several options ranging from a simple repair of the damaged area to a total re-roof. The insurance company had upgraded us to high-wind, impact resistant materials, so we opted to redo the entire roof and head off any future problems. Unlike other companies, the people from Gold were respectful, listened well and were exceptionally easy to work with.

We went with top of the line Malarkey shingles (I know, the name surprised me too). We signed the order, and got on the schedule in just a few days. The delivery truck and the crew both arrived at the appointed hour (8am Monday), unloaded the materials onto the roof via conveyor, and got right to work. This crew of 6 has to be one of the hardest-working group of men I've ever seen - they stayed at it until nearly dark (almost 8pm) the first day and were back at it first thing the next. All in all a full two-day job. They were all polite and very pleasant to be around, though the noise inside was a bit much (they can't help that). Every couple of hours one or two of them would patrol the ground around the house and pick up trimmings and such, and then sweep for nails at the end of each work day.

Once the job was completed the foreman came back to do a final inspection and ensure everything was up to their standards. Now we're just awaiting final inspection from the town to sign off on the job.

Great people to do business with!Margaret C.
We have recently gotten a new roof on our house, and chose Gold Roofing as our roof contractor, thanks to a very positive referral from a friend in the area.

Despite my rather extreme worries and anxieties that pretty much always come up due to past horrifying experiences with various building contractors, the roof replacement went quite smoothly.

The Gold Roofing crew was courteous and efficient, and finished the entire job in a day and a half.

They use quality materials, comply with all local inspections and building codes and such, and their prices are reasonable. No surprises were added into the final bill. We knew about everything that would be done and what the costs would be, before the job began.

The house feels so much airier since Gold Roofing added in several vents on the roof. We didn't realize that not having roof vents was making our house horribly stuffy. It is so much better now, and will probably be cooler in the summer too. We'll see.

This roofing experience was in every way better than our previous roofing experience with another contractor many years ago.Al H.
We've had some major hail storms in the past couple of years, and the "Storm Chasers" - roofers from other parts of the state and even other states - were out in mass! Everyone in the neighborhood got a new roof. But I wanted to change the color of my roof as well as the colors of my home, and that requires Home Owner's Association approval which takes as much as 6 weeks. (If you're lucky). I also wanted somebody local.

About a year later a representative of Gold Roofing knocked on my door. They were doing work in my neighborhood and had noticed that I had the only home in the neighborhood that didn't have a new roof. I told him my plans and to change colors and that I was going to start next spring. He left me a comprehensive folder full of information about roofing, shingle types, etc., and asked me to please give him a call when I was ready.

Of all of the people who knocked on my door, the representative from Gold Roofing was the only guy I liked. He helped me with my insurance claim. (You have 2 years after a storm to file a claim, not 6 months as others have told me). He helped me with the HOA approval. And the crew from Gold Roofing completed the entire job in a single day! They cleaned up so thoroughly that I couldn't tell that anyone had been here. A few days later, the city inspector knocked on the door. He asked us who did the work and told us that Gold as one of the better roofers around, but he'd go take a look just to be sure. It passed. No problems.
I am very satisfied that I called Gold Roofing. I would use them again and I'm recommending them to you as well. (And folks, please put some ice water out for the crews! Those guys work like machines, but they're not. Take care of them, and they'll take care of you.)Brenda H.
I recently had Gold Roofing replace the roofs of 2 properties I own. After nearly a month delay getting started (due to weather and other circumstances) the crew worked until past 8pm to nearly finish the 2 roofs. John came out a couple days later and put the finishing touches on it. He was very informative, easy to work with, great at returning phone calls regardless of time. The roofs look great. I would use this company again and recommend it to others.
Go Back